Start a Wiki
"There's only room in his head for one of us, and it ain't you." -Shadow to Kira

SHADOW is Cubus' sidekick and is a weightless demon that is a master with snares. Shadow can also melt into the shadows hence the name.

When first seen Shadow looks like Cubus's shadow until Shadow stops moving and proves he is a different entity. Shadow helps Cubus in her plot to awaken Morg. Cubus tells Shadow to clear the area of unwanted attention or guardian angels. Shadow is very successful as he jumps out of a billboard and captures Kira, and he captures Eli by throwing his snare strings around Eli. Shadow brings the prisoners to the Appollyon and then hitches a ride on Norman's car and influences Norman. While Shadow is influencing Norman however, Kira attacks Shadow and ties his snare strings to her Wingboard and sends him flying. The rest of his fate is unknown.

Shadow has the power to disappear into shadows and then reappear in different places making him a trick opponent. Shadow uses snare strings as a weapon with which he can capture angels. 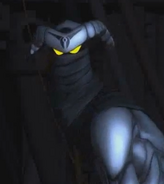 Shadow and Cubus
Add a photo to this gallery

Retrieved from "https://angelwars.fandom.com/wiki/Shadow?oldid=8830"
Community content is available under CC-BY-SA unless otherwise noted.