Start a Wiki
"He chose me because of my strength." -Morg to Arianna.

MORG is the main enemy of the angels in the first three episodes.

Once a trusted powers class angel, Morgan was promised great power by the dragon and fell along with those who betrayed The Maker.

Morg was once a trusted angel, best friend, and figuratively a, brother of Michael. Morg was given a Foundation Stone which he kept, until The Dragon offered him power as long as he used its power against The Maker. During the The Great War, Morgan betrayed Michael and joined the Dragon in his conquest. Morgan became Morg. Morg commanded the Appollyon with the help of Cubus.

After the ship was downed and Morg was imprisoned, in a robotic body, Morg trusted Graven to deliver to deliver the stone to dragon but Graven betrayed him and kept it.  Satan jailed and deactivated Morg on the ship.  Therefore, Cubus tried to awake Morg with help from Shadow so they began targeting a young scientist named Norman Kuburt. After influencing him that, "You are only as good as you look," In the disguise as Victoria Styles Norman fell into temptation and Cubus used his negative energy to awaken Morg. When Morg awoke, he attacked Eli and Kira throwing both to the ground. Kira then influenced Norman to not be consumed by wants. Without Norman's negative energy Eli easily defeated Morg.

In episode 2 Graven crashes into Morg, so Morg takes his stone back, kills Graven, and knocks Swift to the ground. He then later fights Arianna on a cargo vessel, hacks into a robot with the stone, and then retreats to his base on the moon. Arianna chases Morg to the moon to see that Morg had constructed a cannon to destroy the earth. Arianna then destroys the cannon but is captured by Morg. Morg then puts the stone in his chest socket and grows wings and flies to the Valkawa Underworld.

In episode 3, Morg has turned into a stone-infested demon with a craving for power. He eats the powerful demon Krak and the underworld demons he then hungrily closes in on Arianna. He is then impaled by Paladin's Fly-cycle before he can eat Arianna. Paladin and Swift bombard Morg with their vehicles but to no avail. Morg then releases an army of Viral Swarmers which are destroyed by Paladin and Arianna. Michael then enters the beast of Morg and fights Morgan inside. Morg loses, and rather than letting Michael have a victory, he commits sucide.

Morg was, as Michael said 'Never up to honor anything larger then himself' but was rather selfish. He cared most about power which is why The Dragon chose to tempt him with the offer of power. Morg wanted all the things the Maker had such as honor and power but Morg's pride was his downfall.

Morg wields a large sword in episode 1 called the blade of death. In Episode 2, he uses a sword called the sword of rebellion. His wings were also a gave him great speed and strength. Morg can also fire blasts of energy from his hands or sword like Cubus. Perhaps Morg's greatest weapon is his foundation stone, however. Morg was also so armored that he survived a ball of fire he flew straight into and was unharmed by the Merk-7's Energy Cannon and the Fly-Cycle's Pinwheel Cannon.

A hologram of Morg

Morg without energy and imprisoned

Morg at his base 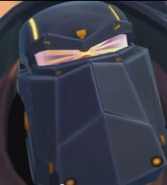 Morgan's Helmet
Add a photo to this gallery

Retrieved from "https://angelwars.fandom.com/wiki/Morg?oldid=8737"
Community content is available under CC-BY-SA unless otherwise noted.