MICHAEL is the head archangel in the Angel Wars. Michael wields a large sword called Kai and is the wisest angel.

Heaven's Greatest Warrior. His great wisdom and experience are known throughout the Heaven lies. But even Michael isn't perfect... he is haunted by a past mistake that almost lost The Great War of Heaven. Michael carries the burden of great responsibility, for he knows that if an Archangel fails, the very foundations of heavens are rocked.

Unlike most of the characters in Angel Wars, Archangel Michael actually exists. However, what he does in angel wars did not necessarily happen. Before The Great War, the council entrusted Michael with 12 Foundation Stones one of which he gave to Morgan who betrayed him during the Great War.

Throughout Episode 1 Michael mostly meditates in The Seven and gives the angels their assignments and only reappears at the end to congratulate Eli and Kira.

In episode 2, Michael and Paladin help Arianna stop a dangerous robot which Morg had infested with his stone.

As soon as Michael returns to The Seven, he departs again to the Isle of Sorrows where he finds the fallen angel Jaza who tells him Morg is in the Valkawa Underworld where he rescues Arianna. Unfortunately, when seeing Morg, Michael angrily and recklessly enters the mouth of the stone-infested demon. When Michael entered the main chamber inside the beast of Morg, he found Morg as he looked like before his fall. Morg and Michael have a fight that ends when Michael shoves Morg against the chamber of the stone. Michael then raises his sword to strike and kill Morg but instead strikes the shrine hiding the foundation stone and takes the stone which completed their mission. The inner structure of the stone-infested Morg began to collapse due to lose of the foundation stone, and Morg is knocked to the edge of a hanging platform. Michael then urges Morg to let go of his pride and repent, but Morg refuses and commits suicide by letting go of the edge and falling down. Michael's last words to Morg were, "I wanted you to find peace." Swift, by the command of Arianna, destroys the underworld crushing the beast of Morg. Michael uses the stone's power to protect himself and returns to The Seven. He gets there first and surprises the rest of the Guardian Force. He points out that "Proud people bring many sorrows on themselves", which is the lesson of this episode.

In The Messengers, when Eli runs into Michael's chamber to give a report to Michael, Michael hushes him because he is meditating. He tells Eli to look for guidance on how to stop his enemies. After being beaten up by a nephilem named Og, Eli goes unconscious and Michael appears to him again reminding him to make to time to make time for praying for guidance. This time Eli heeds his advice and defeats the enemy. Michael also played a role in helping Eli let go of his fake wings and protecting Kira.

Michael is a calm angel who is willing to meditate and wait on The Maker. He also seems to be a bit vengeful however, such as when he attacked Morg out of anger. Michael longs for the day he can lead the armies of heaven to war in a final battle against the Dragon as mentioned in Revelation 12

Michael like all the power class angels has worn angel gauntlets that are able to deflect enemy fire. Michael's primary weapon is Kai his large broadsword. Although he might have had a different weapon when he was not an Archangel. Michael also used his Wings to as a shield against the stone-infested robot's flamethrower. He also carries a silver-blue foundation stone with him.

"To The Maker be the glory." -Michael to Eli

Michael uses his wings as a shield

Michael and Paladin in battle 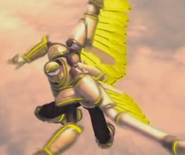 Michael and Arianna in episode 3

The Angel on left is presumably Michael

Add a photo to this gallery

Retrieved from "https://angelwars.fandom.com/wiki/Michael?oldid=9048"
Community content is available under CC-BY-SA unless otherwise noted.