"No riding in the halls." - Arianna to Paladin

ARIANNA is Michael's second-in-command and is known to be a tough taskmaster when it comes to teaching anawim.

She is Michael's second-in-command. Her serious demeanour reflected in her clipped, strict, and sometimes impersonal persona, belie an angel that cares deeply for those under her care. Loyal to the core Arianna suffers no fools, and is stronger than she appears. Arianna is a master strategist who sees beyond the next move making her valuable on the battlefield.

During The Great War Arianna yelled at Paladin to not ride his Wingboard in the hall. Other than that other roles she played in the Great War are unknown.

In Episode 1, Arianna oversees the training of Eli and Kira then gives the guardian force their assignments.

In Episode 2, Arianna continues her mission and finds a cargo carrier delivering a robot to the moon. However, she finds that the pilots Armstrong and Mr McLardy are going to cheat by not going through inspections. She goes to investigate why and finds Morg influencing Armstrong. Quickly Arianna engages Morg. In order to buy himself some time, Morg smashes an engine to crash the cargo vessel on the moon base. Arianna then lifts the vessel up to prevent it from crashing into the base. The vessel lands outside of the base and Morg releases a transformed attack robot to destroy the moon base. Arianna activates her stress beacon and influences Armstrong to save those on the moon base. Arianna pursues Morg and finds a secret base with a cannon to destroy the Earth. Arianna destroys the cannon but is captured by Morg.

In episode three, Morg takes Arianna to the Valkawa Underworld where he turns into a stone-infested monster. Arianna is tied to a post by Krak's Bodyguard but she escapes. Unfortunately, she is cornered by Morg. However, Paladin rammed into Morg with the Fly-Cycle. Arianna then assists Swift by destroying a wave of Viral Swarmers chasing the Merk-7. Michael then gives her command to take down the Nethercell. He goes inside Morg to fight him. After a little while, Arianna makes the decision to destroy the cave. After the angels escape the Nethercell Arianna takes one last look back feeling she just betrayed Michael. Fortunately, Michael survives thanks to the powerful Foundation Stone and then he gives the stone to Arianna.

Arianna is a tough commander who demands one hundred percent from all the angels. Arianna is also a by-the-book fighter and will make sure nobody bends the rules. She is always very focused on her mission and does not seem to understand the concept of fun.

Arianna uses Yari her spear which she can throw or fight hand-to-hand with. Arianna can also use her wings as a weapon such as when she uses her wings to knock Morg off balance. Additionally, was also entrusted with a foundation stone as well as angel gauntlets.

Arianna fights a demon in the Valkawa underworld

Arianna and Michael in Episode 3 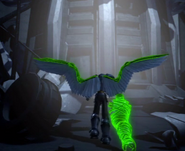 Morg with Arianna in tow

Retrieved from "https://angelwars.fandom.com/wiki/Arianna?oldid=8962"
Community content is available under CC-BY-SA unless otherwise noted.